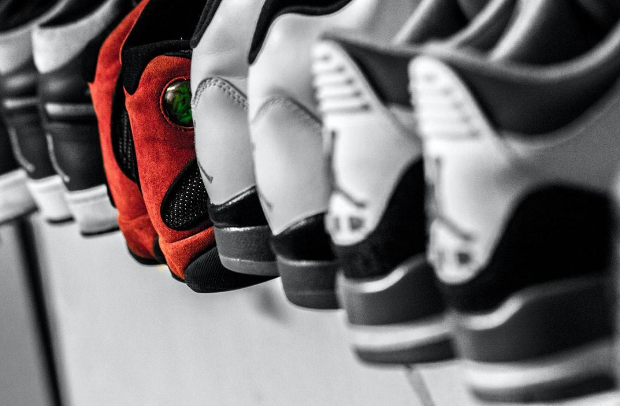 Did you know that Nike didn’t expect to make very much money from Air Jordans?

When Nike released the first Air Jordans, the company hoped to make $3 million in profit over the next three years. But to Nike’s shock, the company made over $126 million from this shoe in the first year.

And since their first release in 1984, Air Jordans have become one of the most recognizable sneakers in the world.

But you may not know that there are over thirty different types of Air Jordans.

So if you’re excited to learn about the various Air Jordan styles and which ones you might want to add to your collection, keep reading. We’ll cover everything you need to know!

We all know about the iconic Jordan 1, but the Jordan 3 is special in its own right. Released in 1988, Nike Air Jordans mark the first time that the famous Jumpman logo appeared on the shoe.

The Air Jordan 3 was also the first design of Tinker Hatfield, who took over the sneakers’ design from Peter Moore.

What Hatfield pioneered was the exposed air bubble in the sole of the shoe, which you can find on many Nike shoes today.

He also featured a unique elephant print on the sides of the shoe. It was a cool touch that wasn’t normally used on sneaker designs at the time that added a cool touch.

Fans love the Jordan 3s for the retro yet timeless design that was a pioneer for its time.

If you’re looking to buy original Air Jordans, then the Air Jordan 11 is a pop culture icon that’s a must for many shoe collectors.

First released in 1995, the Air Jordan 11 became instantly recognizable because it’s the shoe that Jordan wore in the 1996 film Space Jam. Because of this, the shoe is often what people picture when they think of Air Jordans.

Fans love this shoe for its mix of looks and performance. First of all, this model features an understated design that makes the shoe easy to wear with most outfits from your closet.

As for performance, the Jordan 11 features a patent leather mudguard that helps keep the upper of the shoe clean if you’re wearing it outdoors.

The mudguard also stretches less than leather does, so it helps keep your shoe firmly on your foot during intense exercise.

Another pop culture icon is the Air Jordan 5. This shoe solidified the image of the modern Air Jordan because it was famously worn by Will Smith on the TV show The Fresh Prince of Bel-Air.

The design of these Air Jordan sneakers carried over a couple of elements from its predecessor, the Air Jordan 4. This includes the panel of mesh at the side of the shoe.

Another element carried over from the Air Jordan 4 is its mix of smooth leather and nubuck leather. This mix of textures adds subtle detail that creates visual interest without being too flashy.

Michael Jordan is a well-known lover of cars, and the Air Jordan 6 sneakers pay homage to this.

Another creation of Tinker Hatfield, this shoe was inspired by Jordan’s Porsche 911. Unlike the smooth lines of some of the earlier Jordan models, the Jordan 6 has hard geometric angles that create a standout, eye-catching look.

Another feature of this shoe is that it incorporated two new technologies that would later be used for other Jordans.

The first is the neoprene sleeve lining. The second is the grip holes around the tongue of the shoe. Both of these technologies create a shoe that’s super easy to slip on and off, making it perfect for sports enthusiasts and athletes.

Continuing the tradition of being inspired by sports cars is the Air Jordan 14. This time, the shoe design was inspired by the sleek lines of the Ferrari 550M that Jordan had at the time.

While this sneaker was released in 1998, its design is timeless and could be worn today. From the stitched side panels to the pop of color near the sole, these shoes are sleek, edgy, and futuristic looking.

These sneakers were released just before Jordan retired from basketball for the second time.

Since he had been in the business for 14 years, Nike decided to put the Jumpman logo on the shoes 14 times to honor Jordan’s contributions to the sport.

Among the newer styles of Air Jordans is the 35, which was released in October 2020.

And despite decades of shoe designs, the Jordan brand is still focused on creating innovative and standout designs. With the Jordan 35, the unique “eclipse plate” on the side of the shoe looks like a rising sun.

This is also a great shoe to get if you love sneaker collaborations. These include basketball players Luka Doncic, Guo Aylun, and Jayson Tatum. These collaboration shoes feature bright and eye-catching colorways that you don’t normally see.

This sneaker’s features make it representative of the modern Air Jordan. First of all, the eclipse plate supports heel stability (and isn’t only for looks).

The shoe also features Zoom pockets on the forefoot and heel. These pockets help with sprinting and jumping. Another important feature is Flightwire, which helps keep the foot supported and locked in place.

The Different Types of Air Jordans: Which Will You Buy?

From dozens of colorways to the iconic Jumpman silhouette, the different types of Air Jordans have stood the test of time among basketball fans and shoe collectors alike.

And whether they’re a vintage-style pair or a new type of Air Jordan, you’re sure to find a new colorway and model to add to your collection.

For even more articles like this one, be sure to check out more blog posts from our fashion and sports categories today!